July 4th!  We woke up early (4am to be exact) to catch a flight out of IAH at 7:20 that would get us to Charlotte, NC And then catch a second flight to New Bern, NC.  We were on our way to pick up the Queen Mary and move her to Annapolis where we would leave her through August to have some work done.  We had to stop for groceries first as there wouldn’t be any opportunity to do this once we left Oriental.  We arrived at the boat, hurriedly unloaded groceries and suitcases in order to cast off and get to Bellhaven, NC before dark and…more importantly…before the town fireworks!  We followed the ICW north and up the Pungo River.  It took us 4 hours but we arrived by 7pm.  Enough daylight left to take the complimentary golf cart into town for a look-see.  It’s a very small town!  We breezed through it in all of ten minutes as light rain was settling in.   There wasn’t much to explore – most everything was closed due to the holiday.  There were some very picturesque Coastal Living worthy homes along Water St. where neighbors had gathered with their ice chests and tables set up for dinner awaiting the holiday fireworks.  Just like a “Norman Rockwell” painting. We hustled back to the boat so we could prepare for the same.  We were told we would have a great vantage point from the fly bridge of our boat, but the trees across the way were just a bit too tall and the fireworks were not very high so we only saw the top 2/3rds.  It was still wonderful though and remembering why we were celebrating and having good friends on board made it all worthwhile! 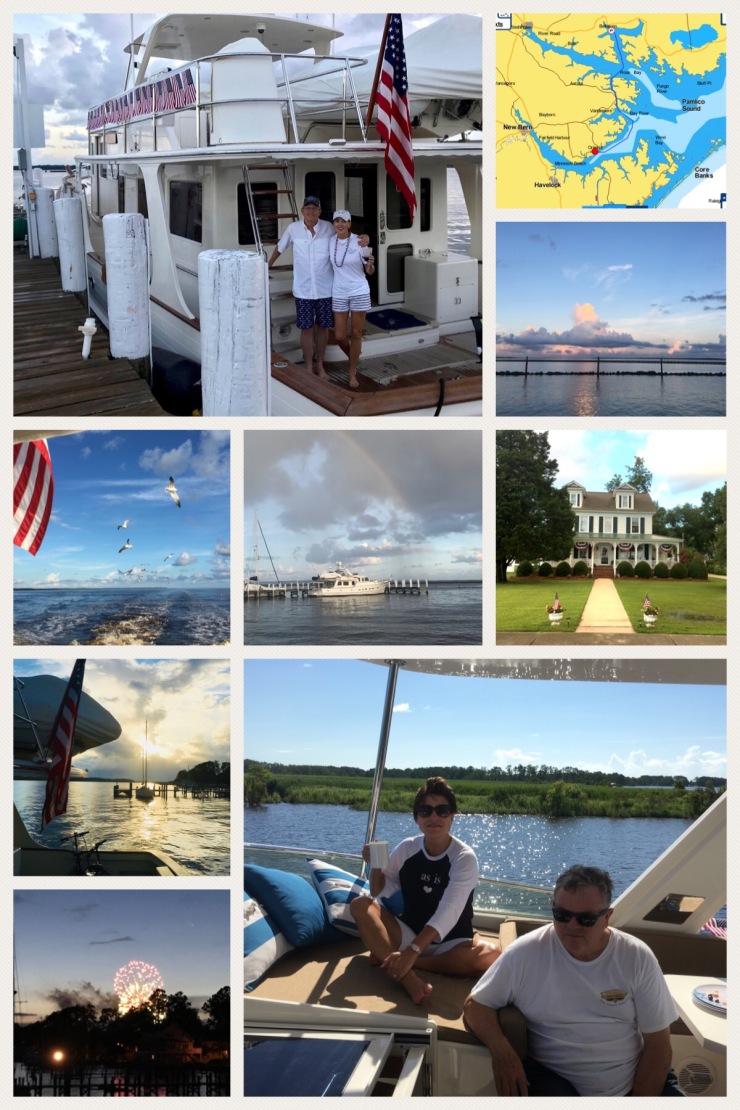 We were up at the crack of dawn… another long day ahead.  Our next destination would be Coinjock.  Leaving River Forest Marina, in Bellhaven, we followed the Pungo River to the Alligator-Pungo River canal.  The canal is man-made, 23 miles long and straight!  It was however some of the most beautiful scenery along the ICW to date!  The water was like a mirror!   There were deer, turkey and Canadian geese feeding along the shore. 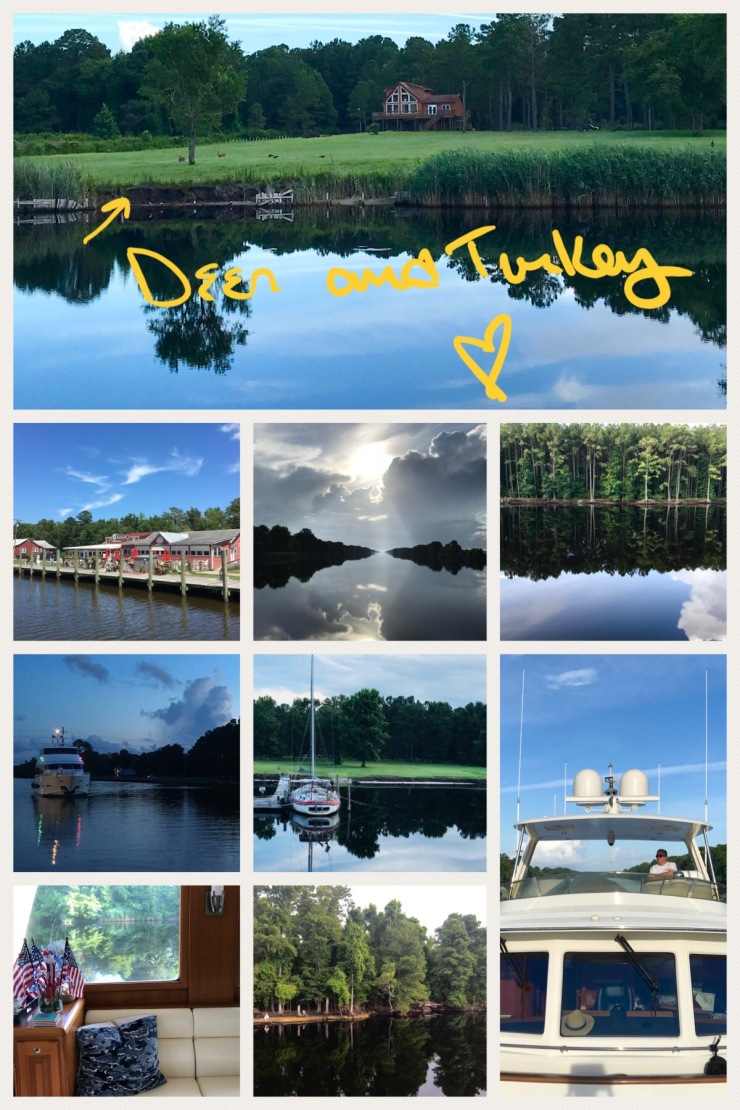 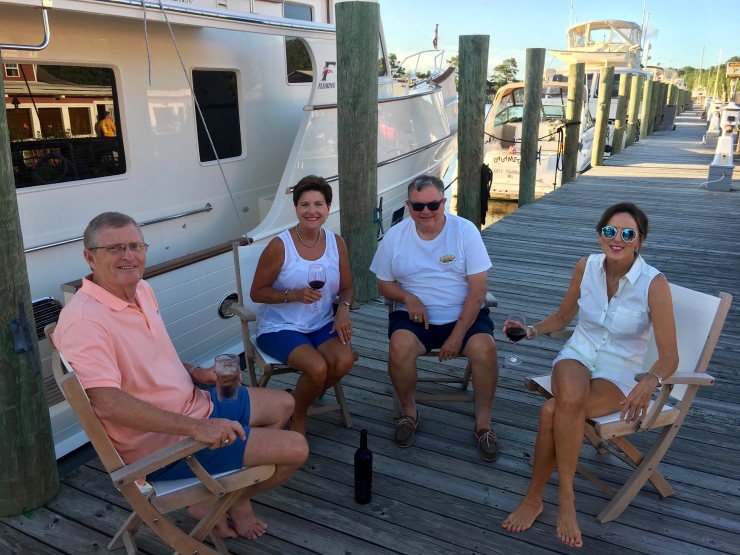 Dock time! And in case you were wondering “ where in the hell is Coinjock”,  check out Lynne’s t-shirt! 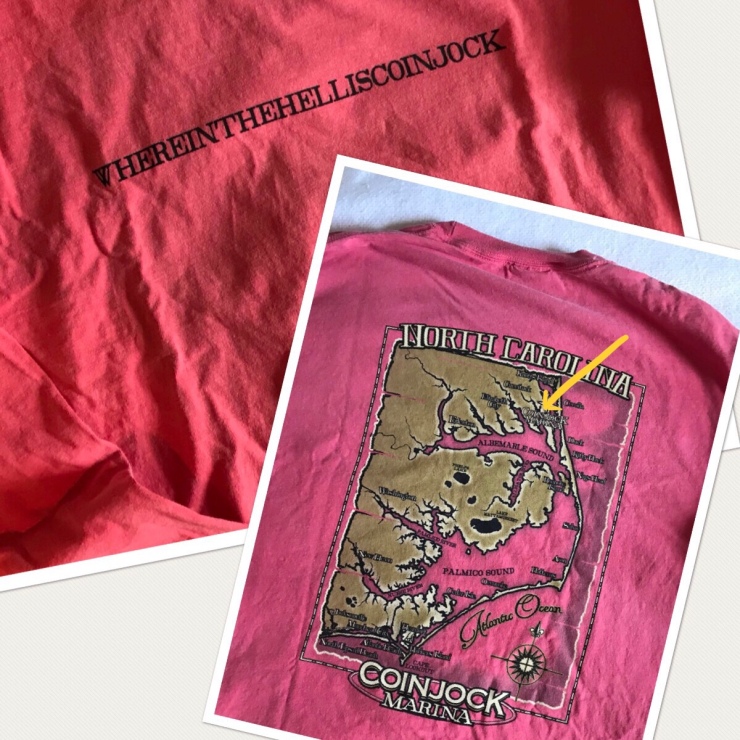 It was a quick overnight stop and then we were on our way to Norfolk, VA…

It was along this leg of our journey where we passed mother Ospreys with their new babies perched in huge nests built on top of the ICW markers.   I was extremely disappointed I did not have my 400mm lens with me.

On the way we passed through several bridges and also a lock. 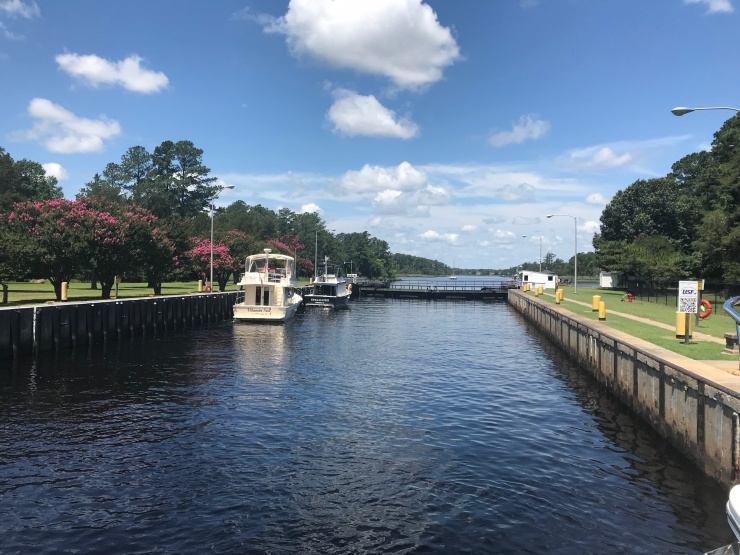 Arriving into Norfolk from the ICW is quite impressive!  You are greeted on both sides of the river by the Naval Ship Yard.  There was a navy patrol boat that looked ALL business so you don’t want to linger too long here haha! 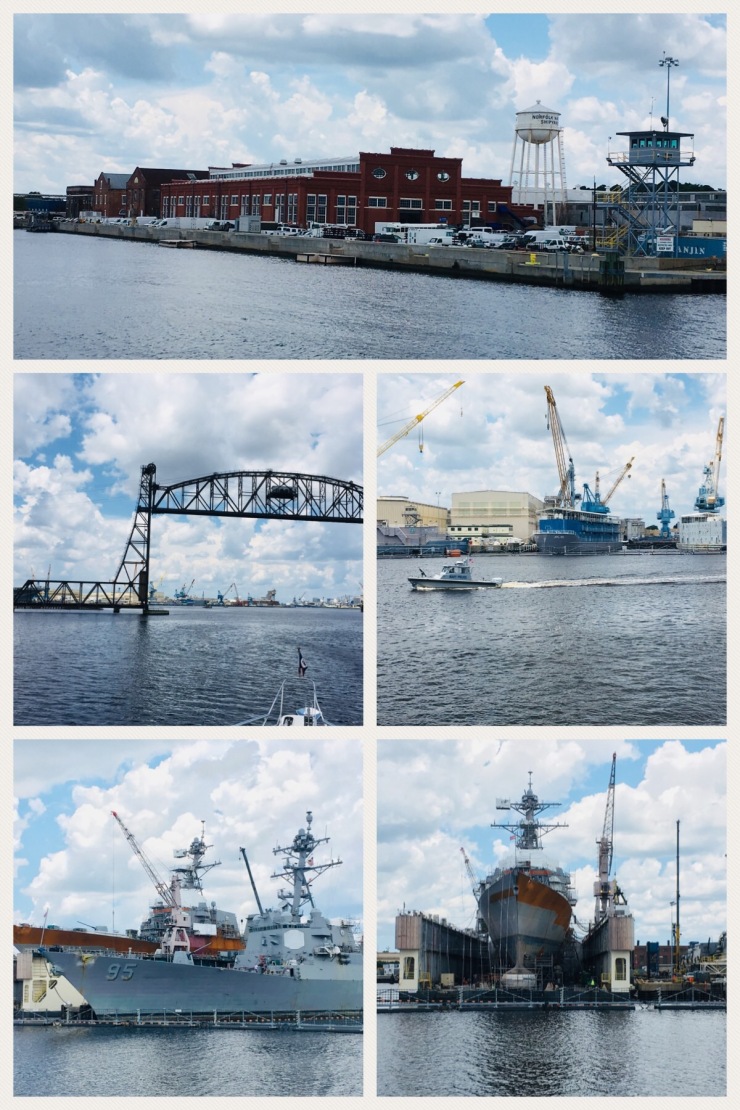 Bad weather began to creep, so we hurried up to get to the marina before it reached us however, we didn’t make it and had to wait out the lightening before we could tie up!  Finally the weather subsided and all was well.  That night a norther blew in (mid July! Really??) and had the Chesapeake Bay all stirred up.  The next morning, the wind was blowing a stiff 25+knots.  We attempted to make our way up the Chesapeake but after a 40 minute battle with the 4-6’ seas and occasional 7 footer, we decided to turn around and call it a day.   Although the QM was quite capable of handling these seas, we had at least 6-8 hours ahead of us and that would not have been fun!  Jeff was able to maneuvere the boat back into the narrow channel at Salt Pond with the strong winds and following seas.  WHEW!  lucky for us though because it allowed us to spend the afternoon/evening at the Waterside District in downtown Norfolk. 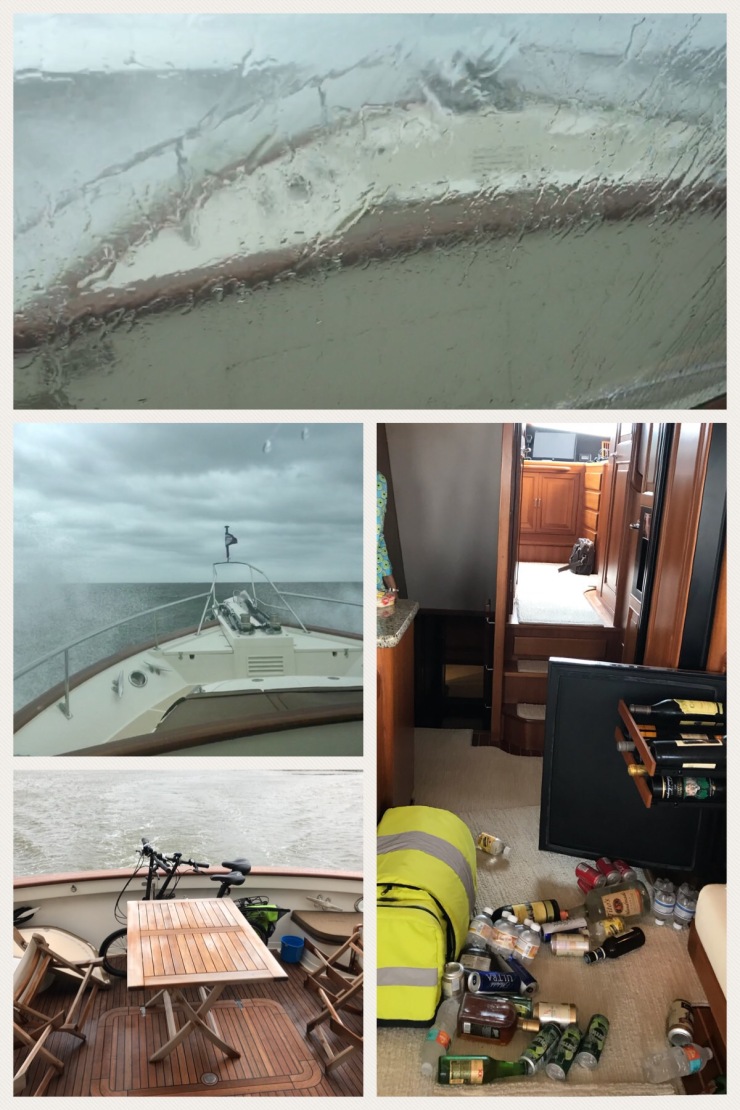 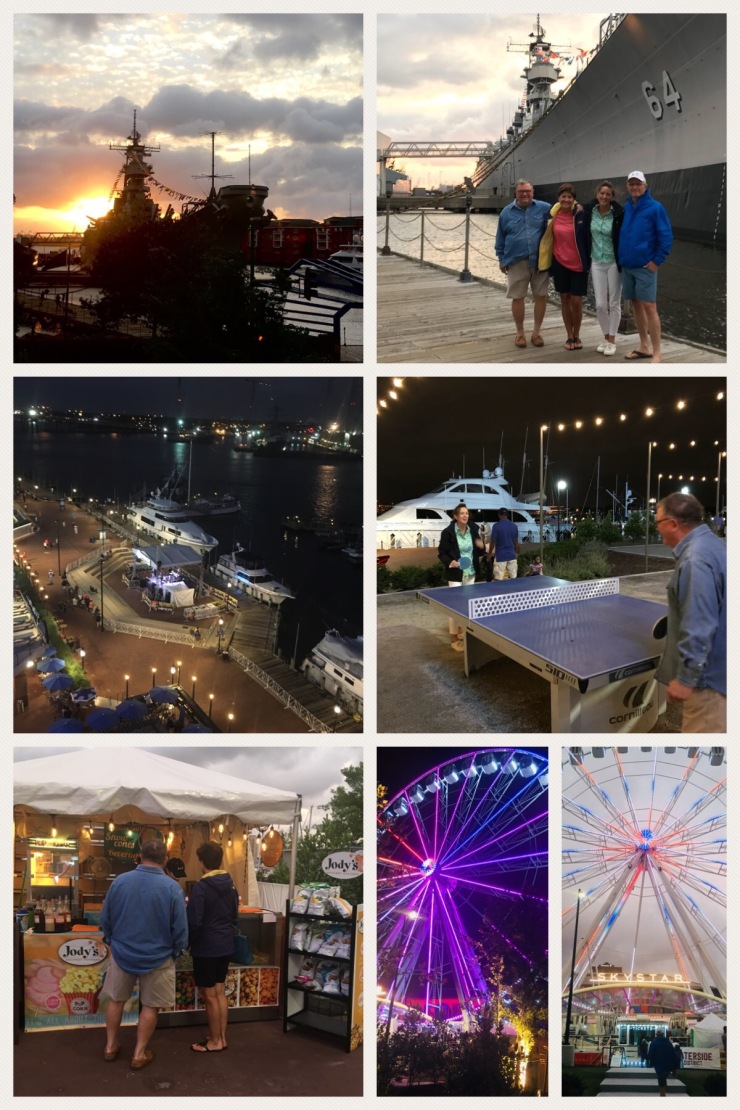 We left the Queen Mary at the Salt Ponds Marina where she is berthed next to the famous “Suzy Wong”.. 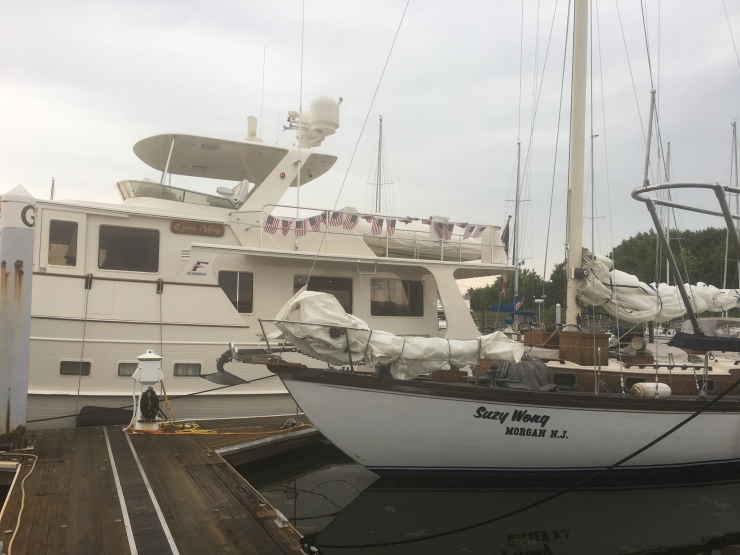 We spoke with the current owners and they gave us the history of the boat. 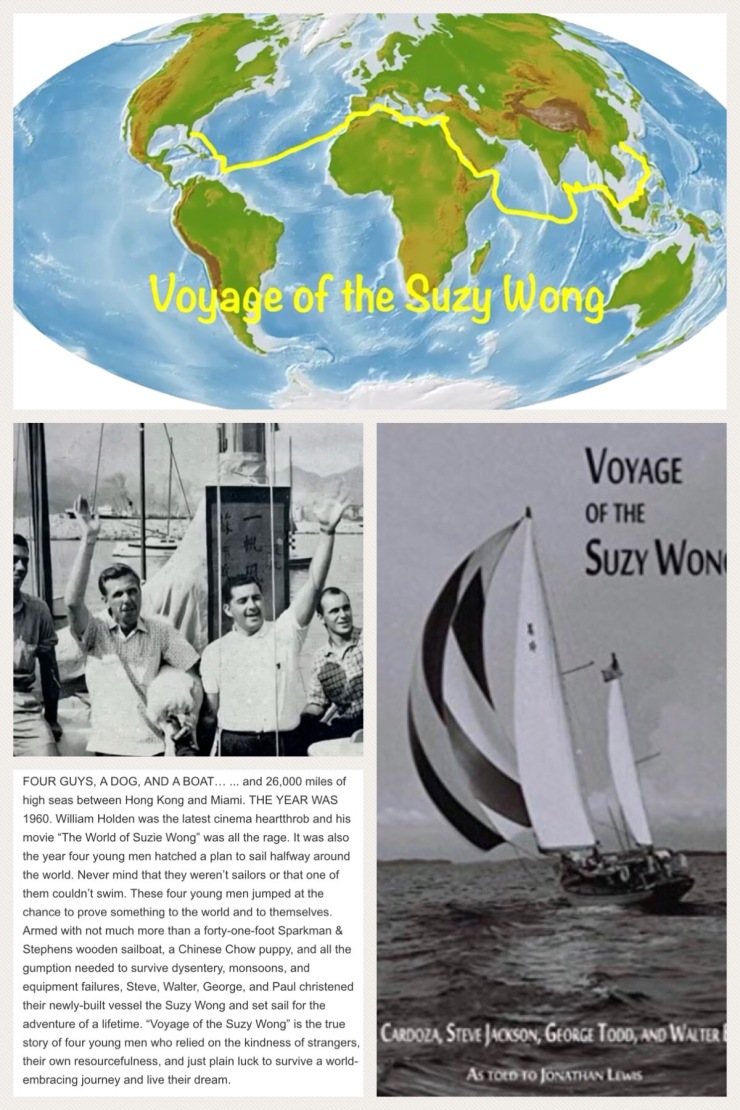 When the Suzy Wong returned to Florida from her around the world adventure, William F. Buckley purchased her.   Rumor has it the New York Harbor yacht club, of which he was a member, asked him to change the name of his boat. He would not.  It was then they kicked him out of the yacht club!  Go figure lol.  Amazon has the book written about this journey and I plan to pick up a copy!

A special thank you to Jim and Lynne for joining us and making the trip that much more fun!

View all posts by Mary